When she was growing up, Lorna Forbes learned about her cousins in Europe, “the family over the water.” They included Aline Tailleux, born Eileen Forbes, who with her husband Francis Tailleux helped protect Jewish refugees from the Nazis during World War II. Arrested for her courageous actions, Aline was sent to a prison camp in Brens, northeast of Toulouse.

One of those whom Aline protected was Sophie Seligson. She had been a student in Liege when the Germans attacked Belgium in 1940. Sophie had to flee, but she couldn’t get back to Luxembourg and her family, including her sister Jeanny and brother Erni. Instead she circled France, eventually finding refuge near Aix-en-Provence with Aline’s help. 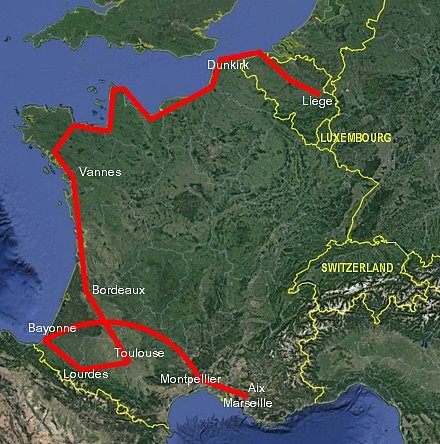 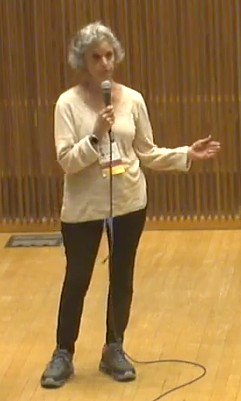 At our Storytelling session on May 26, 2019, Lorna described Sophie’s tale, with which she hopes to combat today’s widespread ignorance of the atrocious things that happened during the war and of anti-Semitism in general. You can download it in pdf form by clicking here.

Here is a link to a pdf copy of the January 2020 letter from Gael Treesiwin.

Also, do you know someone in high school who would make a great Oberlin student?  Click here for the Admissions Student Referral Form.

In 2013, when Wayne Alpern was named President of our Class of 1969, composing an annual class letter became one of his duties. Remember getting those messages in the mail? You can read them again down below. These letters are different from those we have been accustomed to receiving over the years. Wayne's "ruminations" seem more like eloquent sermons, leading to insights on the qualities that have always made our college so special.

On April 18, 2018, when the dispute with Gibson's Bakery was escalating, Wayne wrote the following to President Carmen Ambar, urging that the College "extend the palm rather than the fist."

Dear Carmen,
¶  As President of the Class of 1969, I'm taking the liberty of sending you an open letter, with copies to other Oberlinians I respect, to express my views on an important College issue. I've studied all the court documents in the Gibson case from the perspective of an attorney with several years of litigation experience. I am disappointed and concerned we are taking such an aggressive and defensive stance in this matter and wish to urge a more conciliatory approach.
¶  The College has an untenable legal position in my opinion. I don’t understand who or what is driving our strategy, but I also question whether our lawyers understand who we are and what is at stake. They're fanning the flames, not putting them out. We have retained six lawyers from three different law firms, one of which has over 400 attorneys in ten states. The docket sheet at this early stage is already three pages long with fifty entries growing fast, including numerous contested motions and discovery skirmishes. One of our deans is sued as an individual defendant, and a department chair is about to be deposed. Jury trial is set for May 2019, coinciding with our Fiftieth Class Reunion.
¶  The College's litigious response to the Gibson matter is out of character and detrimental to our relationships and reputation. It’s not effective and not serving us well. Whatever some members of our community might feel, we are now embroiled in a controversial and costly legal battle against one of our longstanding local families and beloved institutions while holding a losing hand. The deck is stacked against us — court is a tough place, litigation is not academia, Oberlin hasn’t been doing well on the PR front, enrollment is down, alums are disillusioned, the faculty is unnerved, the townspeople are angry, Main Street is resentful, and our favorite place to eat donuts frankly has more law (not to mention sharper lawyers) on its side. We're shooting ourselves in the foot and are very likely to do more harm than good the longer this continues. It looks bad at a time we don’t need this on our resume. It's difficult for me and others to explain this as our Reunion approaches. Even a victory would be Pyrrhic. It's David versus Goliath: we won't win, we can't win, and to be honest, I'm not sure we should or want to win.
¶  I strongly urge the College to follow Michelle Obama’s sage advice, which you yourself often cite: when they go low, we go high. Adopt a more magnanimous posture by extending the palm rather than the fist, settle this case, pay the Gibson family the relatively small amount of money they want, and let these three beleaguered, apologetic shoplifting kids get their lives back. They are being used and abused by both sides. Above all, let’s do what we do best: teach. Conduct an open college/town forum with students and shopkeepers, professors and police, administrators and aldermen to facilitate dialogue, air grievances and restore the respect and trust we need to function as the ethical community our founders intended. That is what Oberlin is all about, not distasteful accusations of racism and greed, courtroom taunts and condemnations, and tactical motions for change of venue.
¶  Oberlin’s mission is to elevate others and ourselves out of the pit, not to wallow in it. We ought to be leaders, not litigants. Court is not the place to fight a family squabble; better to work it out over the kitchen table. This incident is pulling us down, but we can rise up by seizing it as an opportunity to demonstrate why we are virtuous. It's more than a chance, it's our charge. If we honor the true spirit of Oberlin, we’ll know how to act. That’s the lesson I learned fifty years ago, at the corner of College and Main, in the shade of our historic Elm. And that's why I feel privileged to be Class President during our Reunion, but not during our trial.
¶  With admiration and support,       Wayne Alpern        Class President ‘69

Wayne has also added music to historical sounds.  Simply click on the pictures.  If you're wondering about the title of the second track, it's explained in this article. 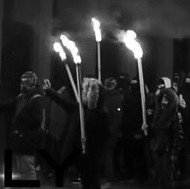 The Torches Are Being Lit  (added November 2018) 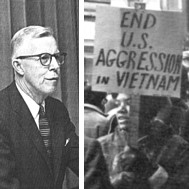 Work, Study, Get Ahead, Kill 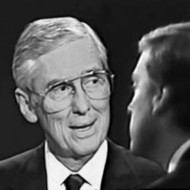 You're No Jack Kennedy 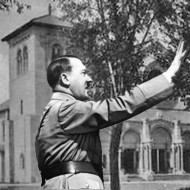 In 2013, Wayne admitted he was an unlikely selection to lead our class.  Then in 2014, he told how Oberlin's very first professor was also an unlikely choice.  In 2015, he revealed we've all been shaped by Oberlin Perfectionism, and in 2016, he profiled our introspective Alsatian namesake Fritz Oberlin.  Four more letters would follow.

If you find these images hard to read on your smartphone screen, just click the blue symbol. 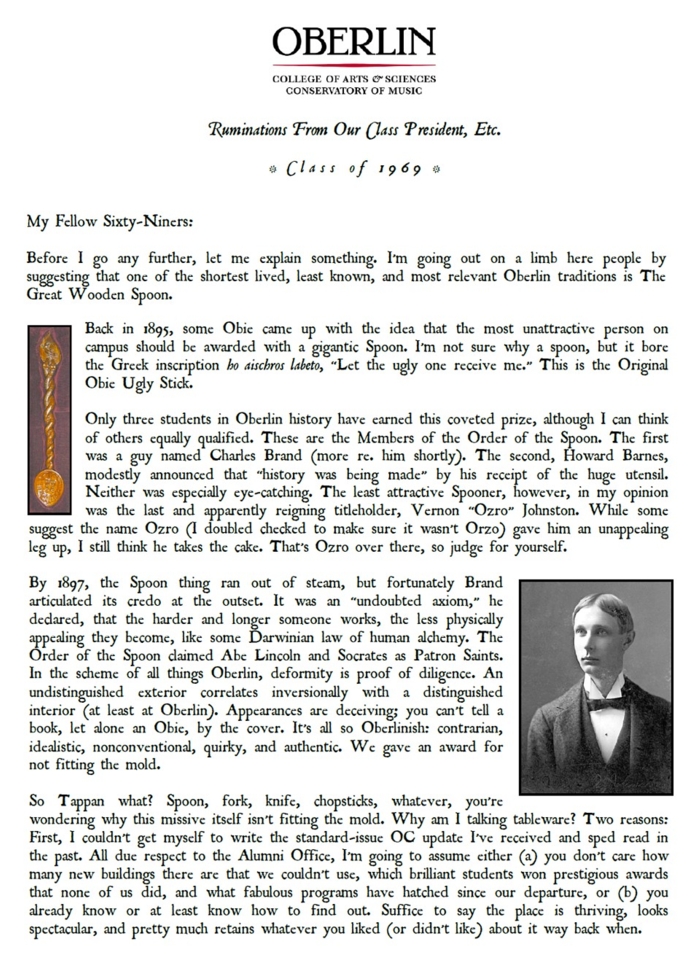 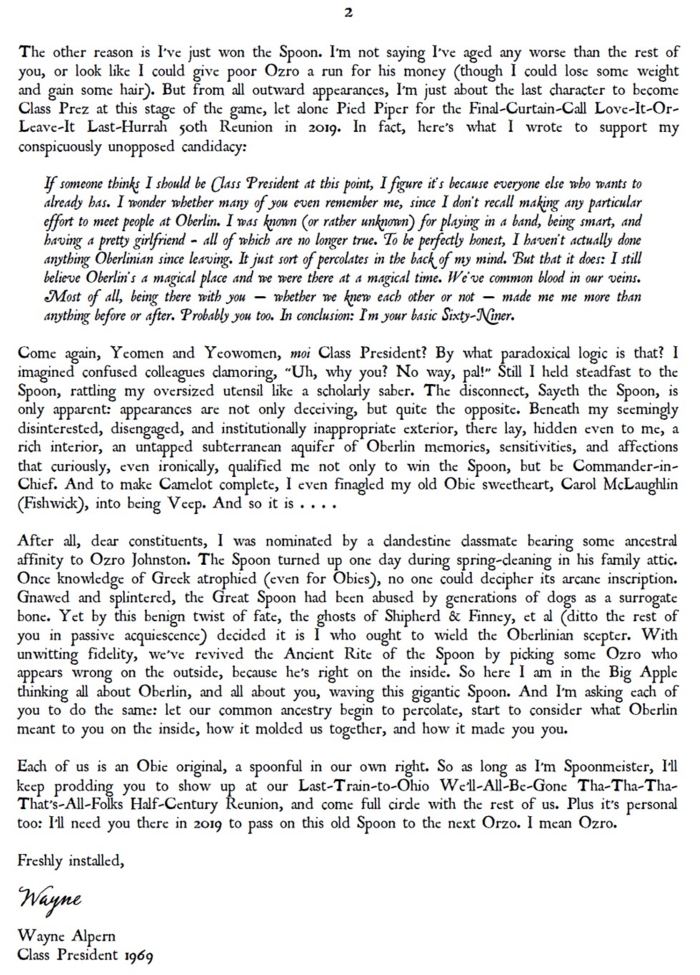 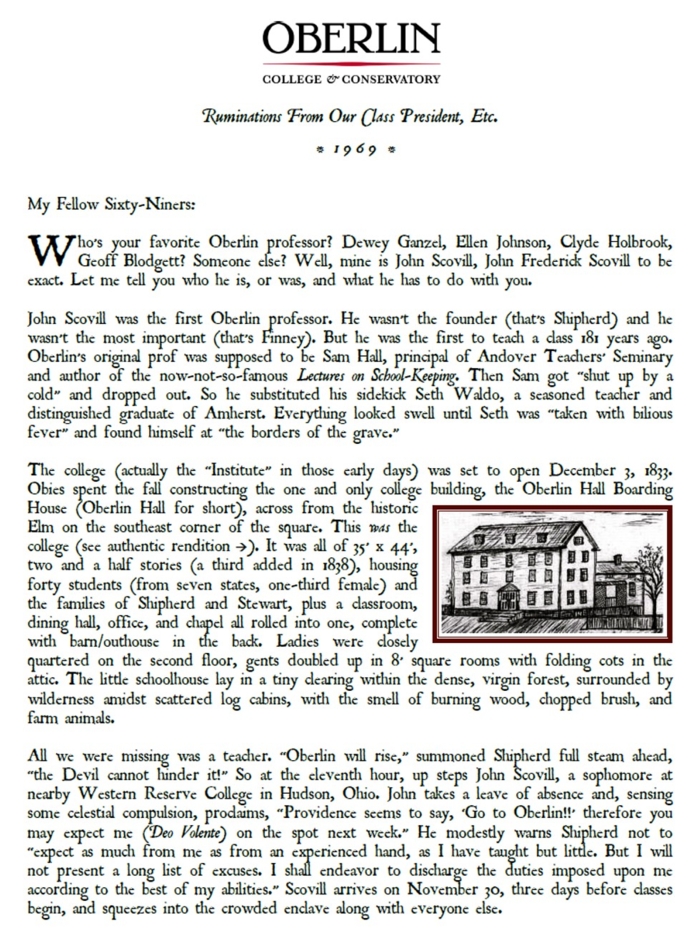 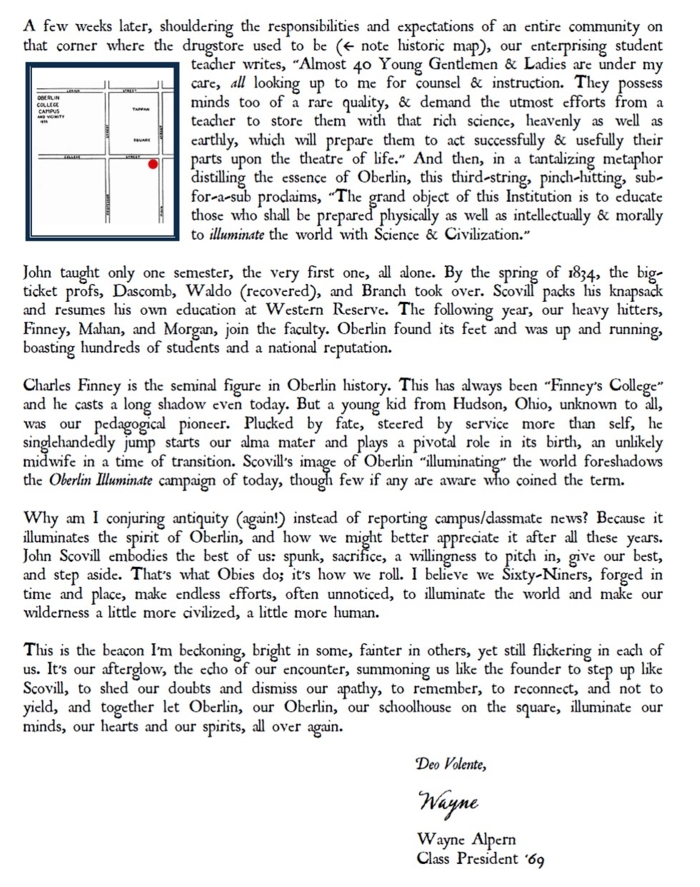 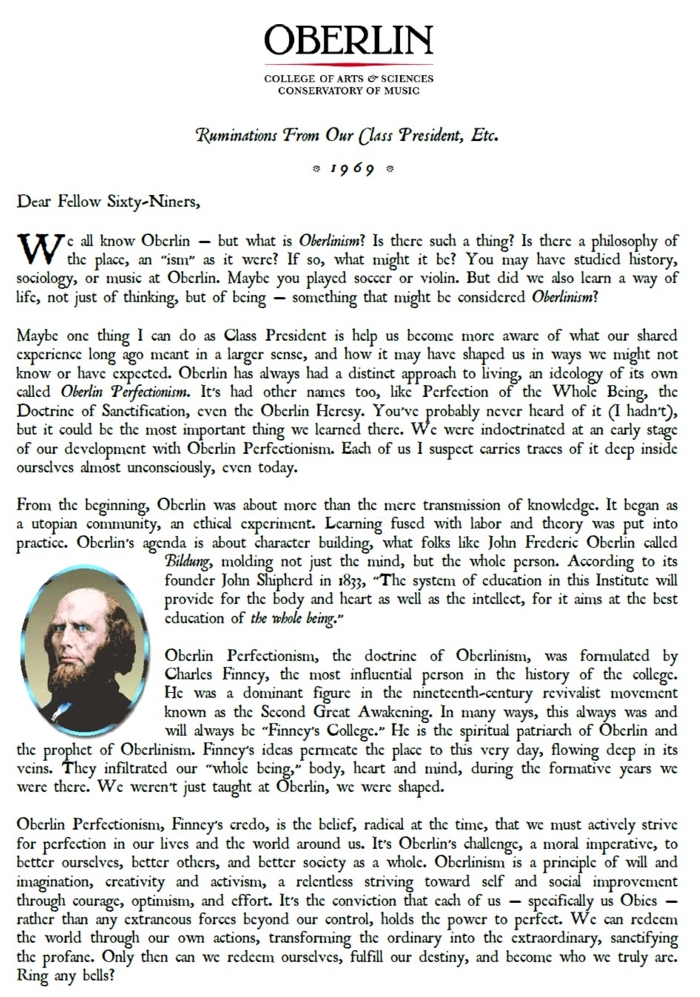 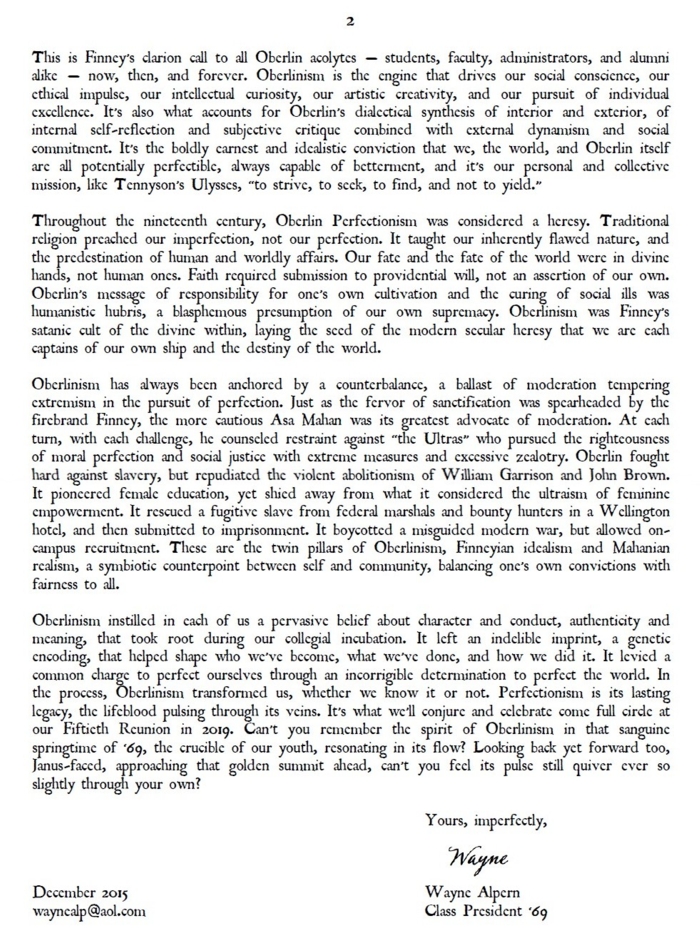 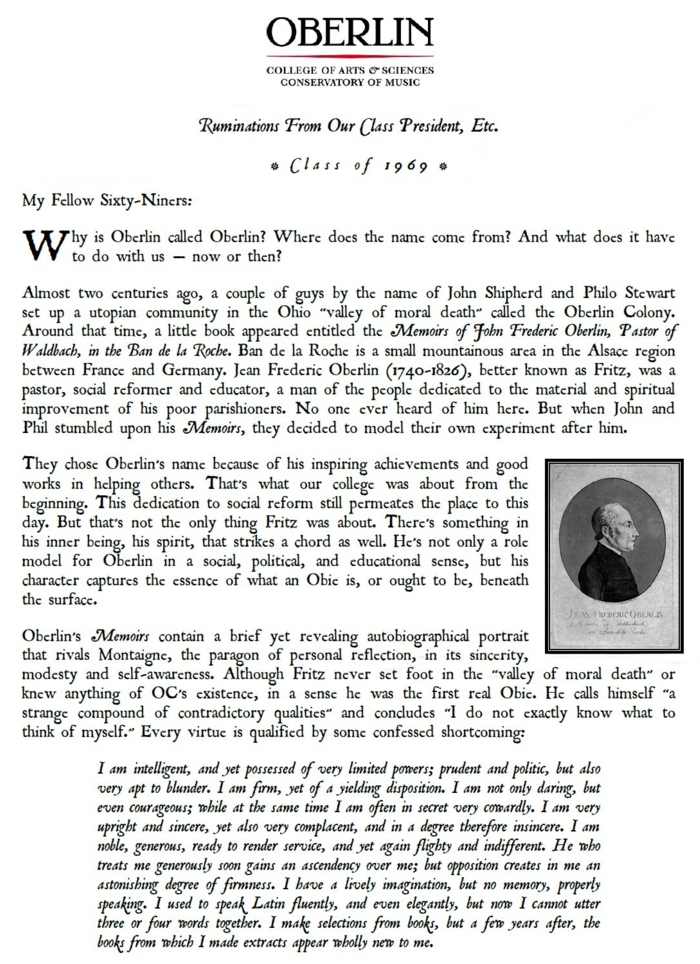 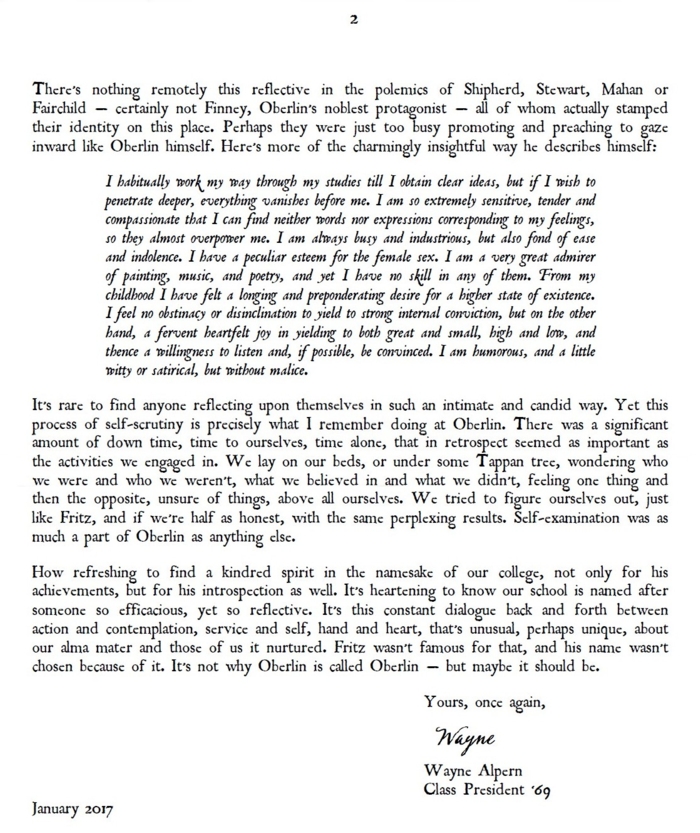 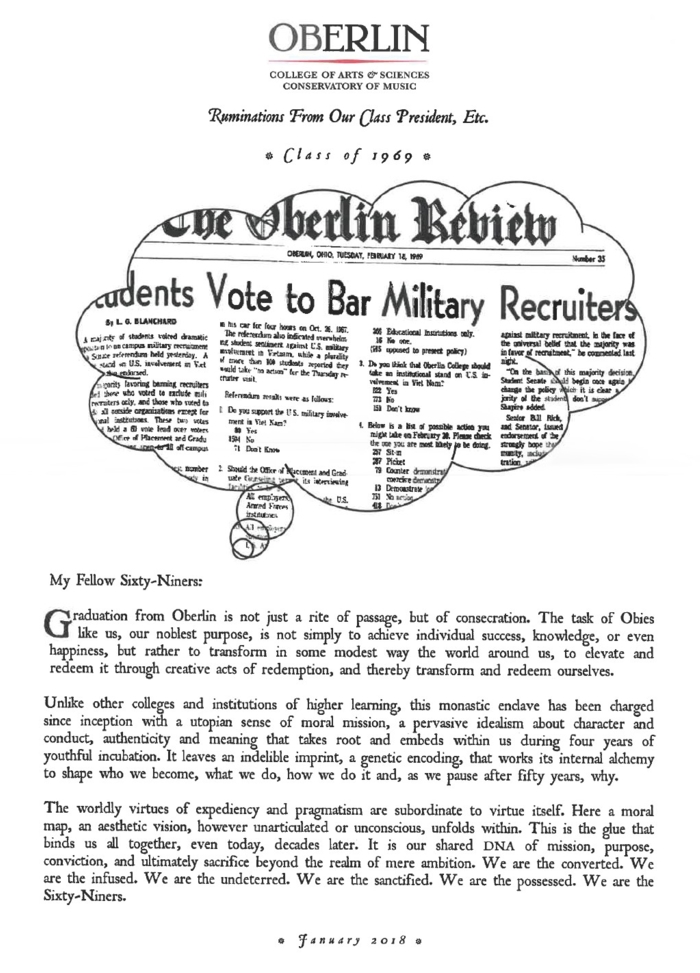 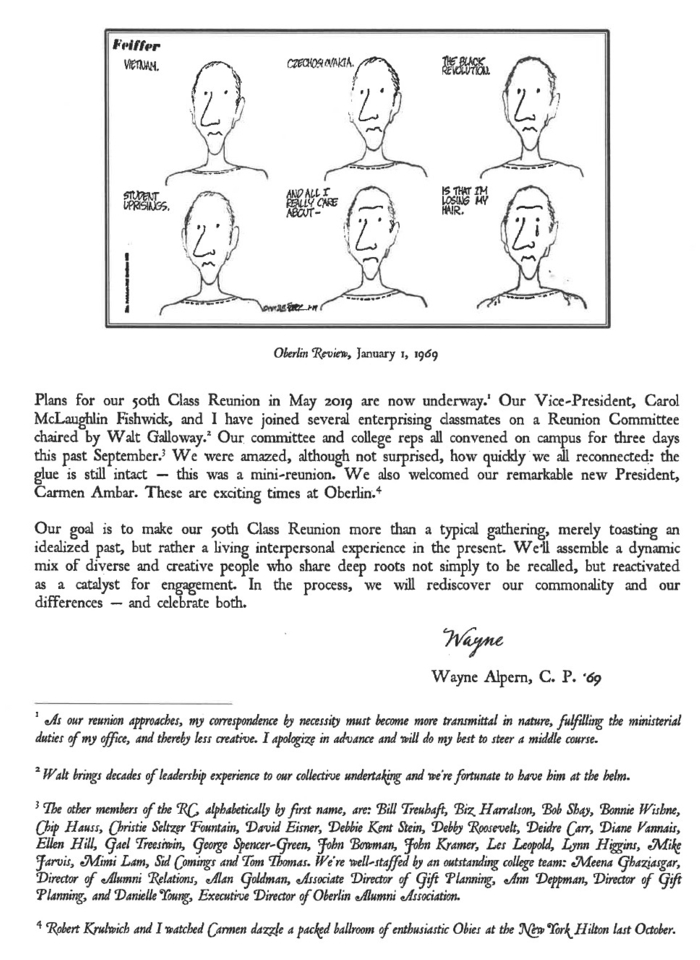 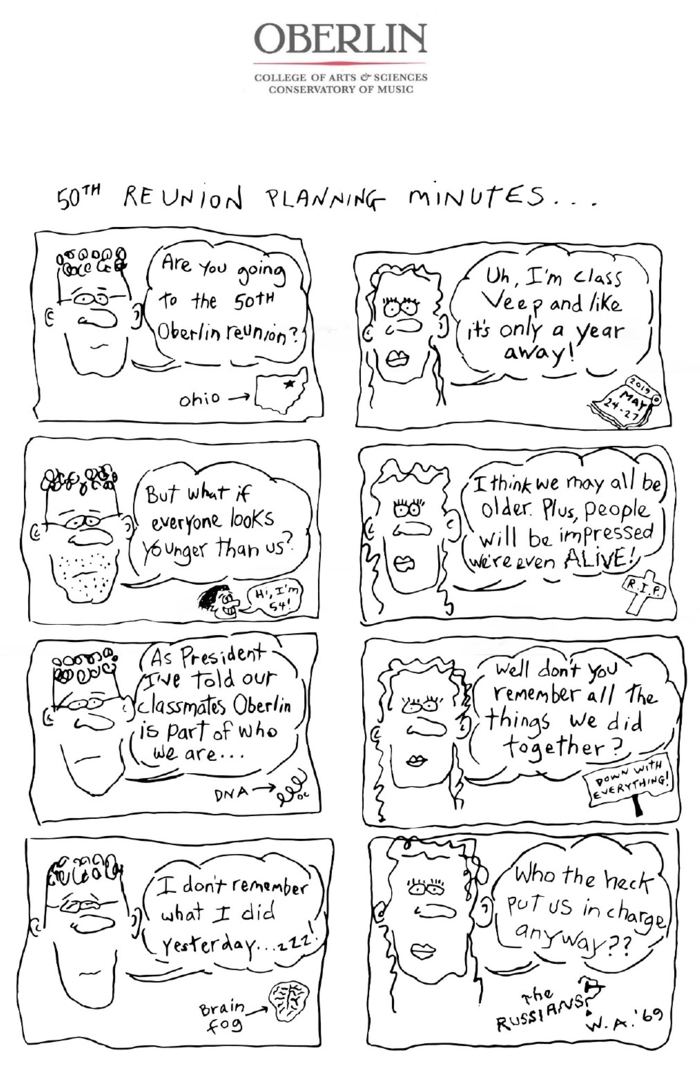 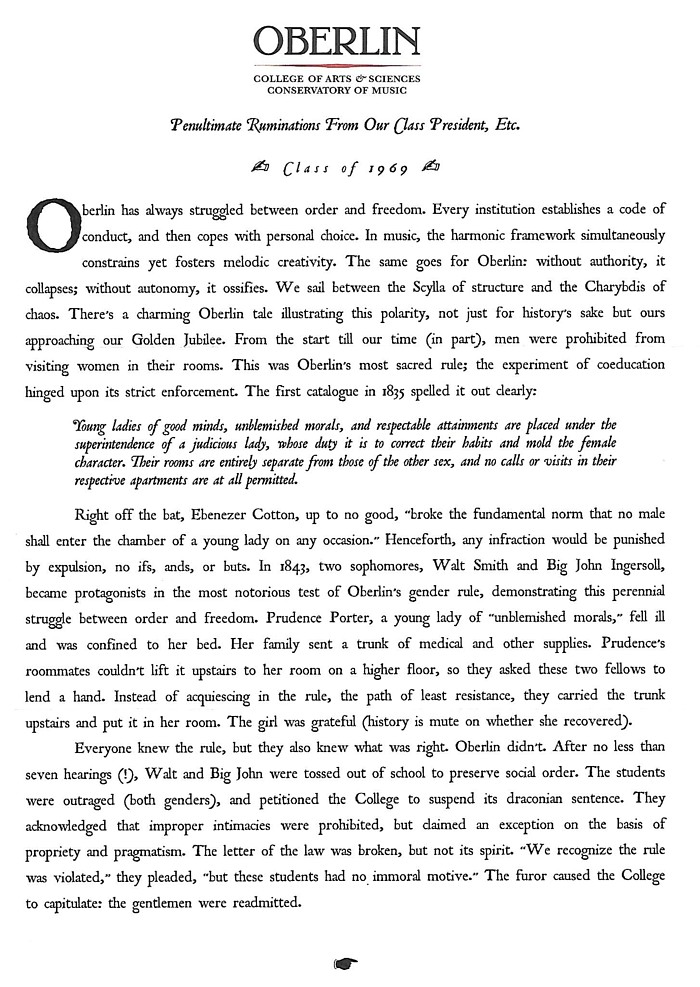 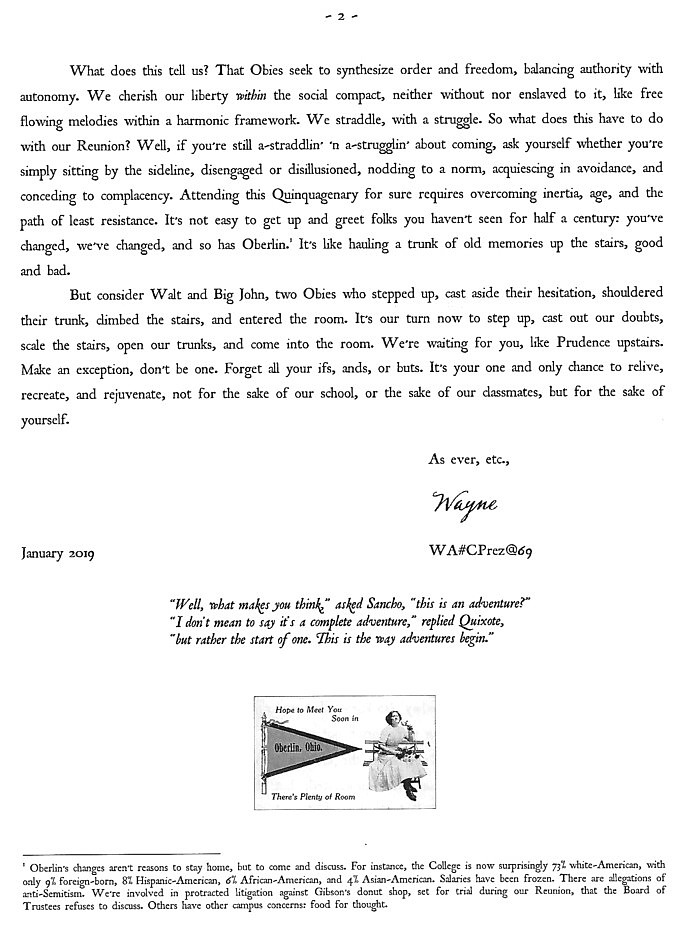 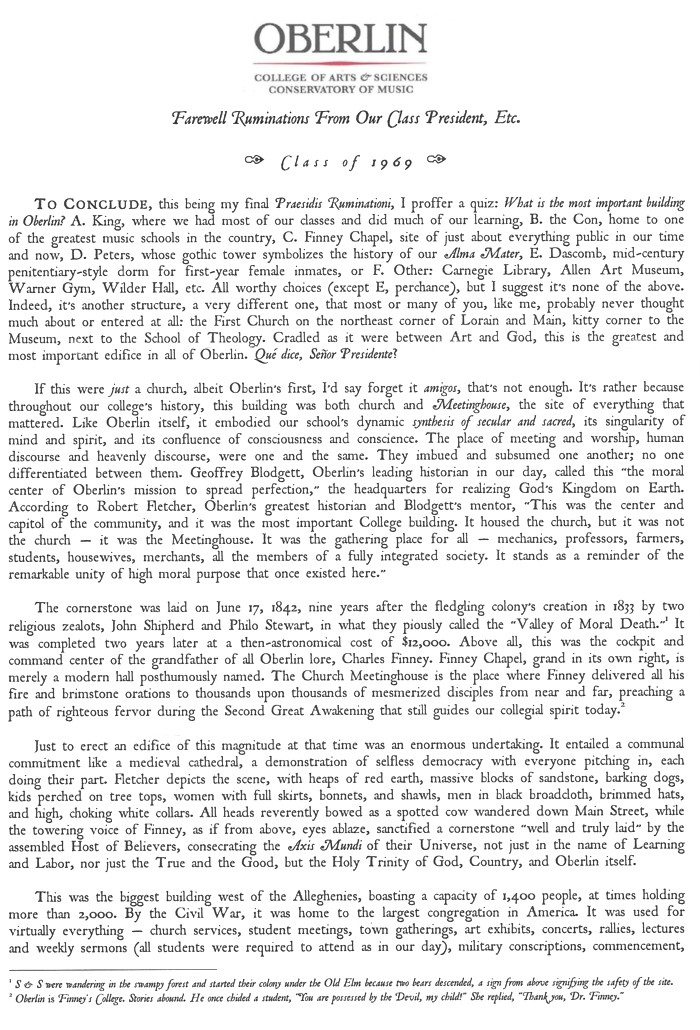 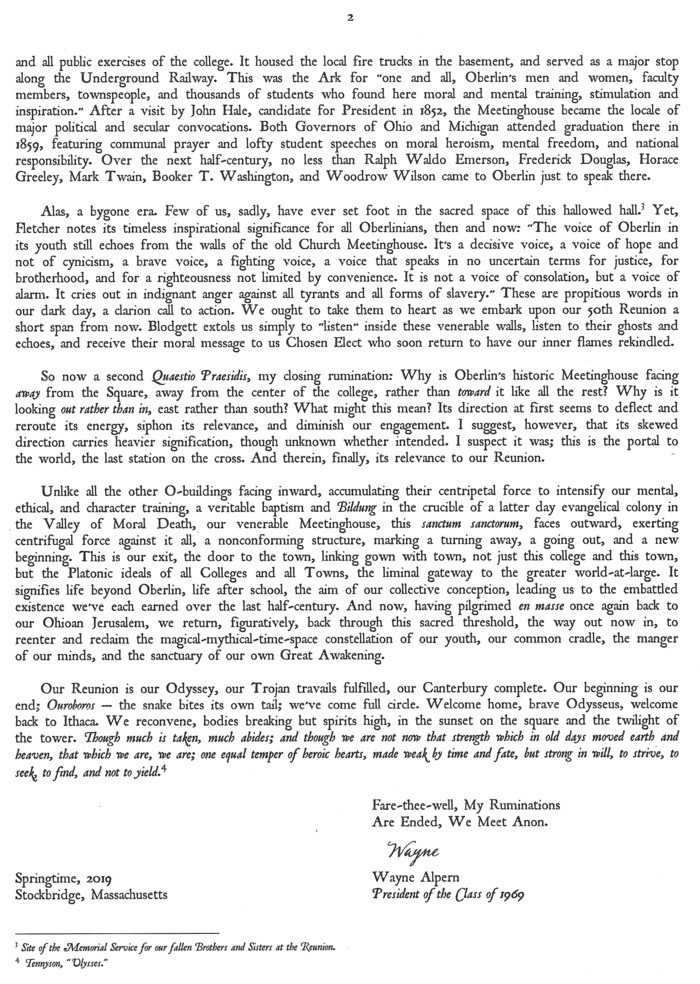