Oberlin is all about its students. Much of the college budget goes to scholarships, supporting students who otherwise wouldn’t be able to afford the school.

At our 25th reunion in 1994, we established a Class of 1969 Scholarship Fund. In so doing, we joined many other Oberlin classes who have named and endowed such funds. Our donations were distributed to deserving students in the 20th century.

Now that fund has been revitalized. It’s our Class Gift for our 50th reunion! And we’ve already raised over $200,000 in contributions to endow it.

An endowed fund doesn’t distribute contributions as soon as they’re received. Rather, they’re invested. The fund earns interest, which can then be applied to scholarships indefinitely. This makes it possible for future generations as well as current students to benefit from an Oberlin education. The more we add to the Scholarship Fund, the more interest it earns and the more students we can support.

By the way, if you know someone in high school who would make a great Oberlin student, click here for the Admissions Student Referral Form.

The Class of 1969 set an overall fundraising goal for our reunion of $8 million, including the Scholarship Fund. At the Crimson and Gold Convocaton in Finney Chapel on May 26, Walt Galloway announced that we had surpassed our goal! Total giving for the 2019 reunion, including all other classes, added another $14,137,455. 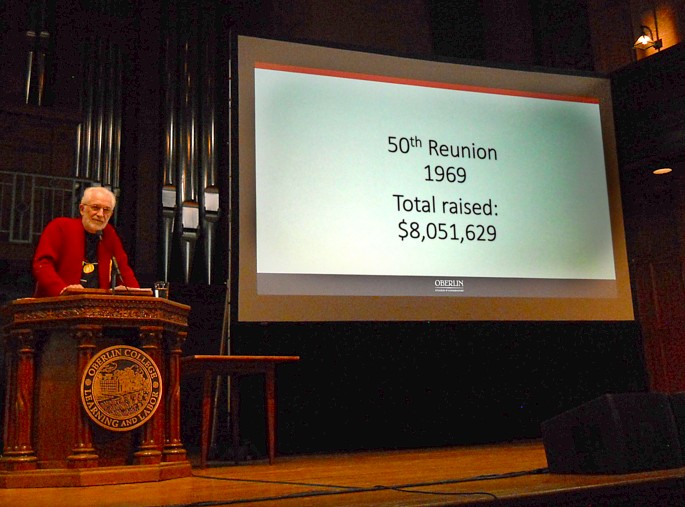 The numbers continued to increase through the month of June, adding nearly a quarter million more.  All donations (including planned or deferred gifts) from July 1, 2014 through June 30, 2019 count toward the official total, which turned out to be $8,298,891.84.

You're welcome to donate to any area you desire. Undesignated gifts to the Annual Fund are applied to the area of greatest need, and consistently that includes the Annual Fund's top priority: scholarships. If you are especially interested in a particular department, activity, or division (Con or College), you can certainly donate to that. However, we do hope you’ll help us grow the Class of 1969 Scholarship Fund, so we can make the endowment as large as possible! 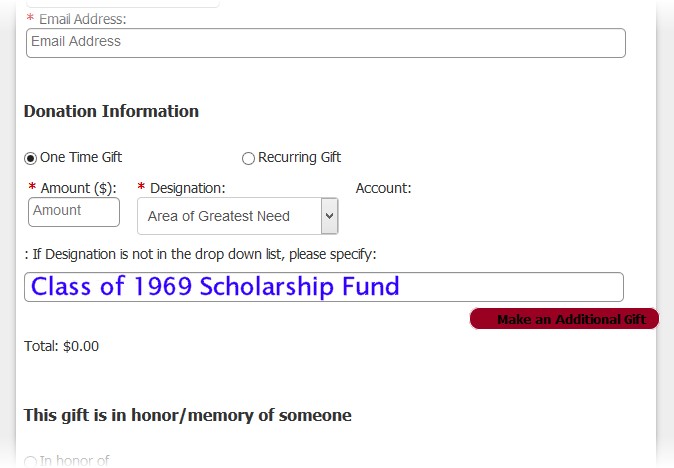 You can donate easily online at www.oberlin.edu/donate. To put part or all of your gift into the Class of 1969 Scholarship Fund, just type it into the ‘Other Gift Details’ box like this.

If you have interest in planned gifts, such as a bequest or a gift annuity, please contact Alan Goldman, 50th Reunion Liaison, at (440) 775-6784 or at agoldma2@oberlin.edu.

On behalf of 21st-century students, thank you!