Our Years on Campus

Have a memory or link to add to this page?  Contact us, or send an e-mail to t2k_us@yahoo.com (Tom Thomas).

Have something to say about any of these items?  Click on the contributor's name and send them a private message or post a comment on their profile.  Or you can post your thoughts to a forum in our Discussion Threads.

There's a new entry below; down on Morgan Street, this is Gudrun.

Remember 1965?  We’d been accepted at Oberlin, we were getting ready to leave home, but we didn’t know quite what to expect when we arrived at the "overgrown crossroads on the banks of Plum Creek."  We needed some pointers.

Fortunately, the upperclassmen had thoughtfully put together a summer reading program for us:  a 58-page Freshman Handbook.  This volume told us all we needed to know before donning our freshman beanies.  There were hints about traveling to campus, moving in, classes, social life, extracurricular activities, and more.  Click to relive it all again!

When we were freshmen, in certain circumstances we were required to use a wastebasket to keep the door open so prying eyes could make sure we weren’t doing anything naughty.

Several of our class were affronted by such insults to our personal integrity.  Wendy Forbush kept an old flyer from Students for Reponsible Action with the initials NGE in the lower corner; it's reproduced below. 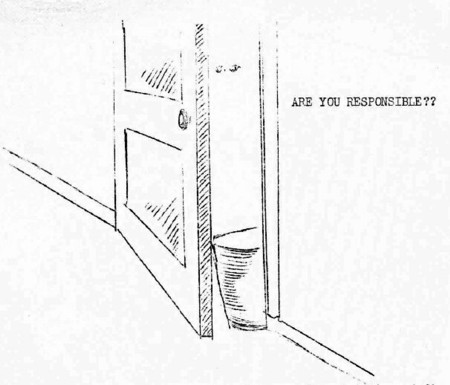 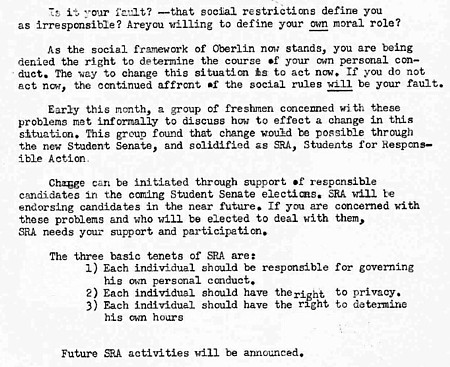 Wendy also came across a poster in a box in her attic.  On March 27-28, 1966, four of these classmates of ours were elected to the brand-new Student Senate, led by Krulwich with 405 votes and Forbush with 384. 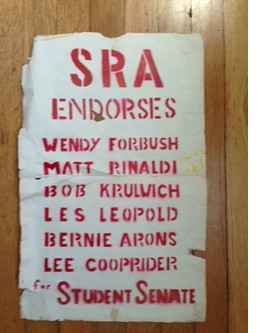 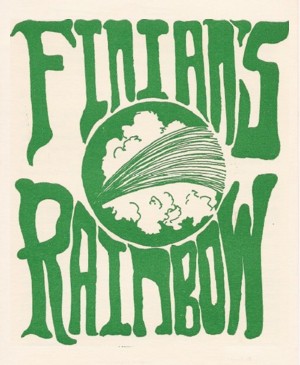 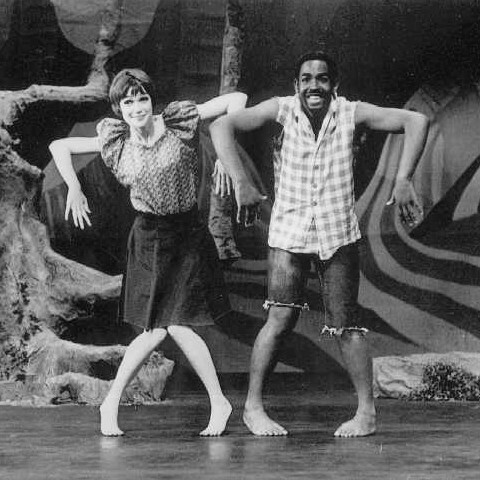 Including audio clips from WOBC, this is the story of the "March, Arch, and Vigil" in May 1967.  Students were demonstrating for more off-campus housing and, for those who still lived in dormitories, "autonomy" to set their own hours when students of the opposite sex could visit.
(from Tom Thomas)

STOCK PHOTOS
In 1968, on the night of Good Friday, the Oberlin Musical Union and orchestras performed Benjamin Britten’s War Requiem.   This choral work had premiered at Coventry less than six years before.  The printed program includes words such as these:

Be slowly lifted up, thou long black arm,
Great gun towering t’ward Heaven, about to curse;
Reach at that arrogance which needs thy harm,
And beat it down before its sins grow worse. 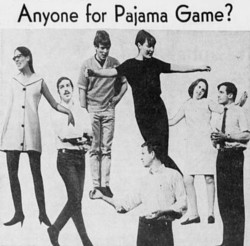 The 1967-68 Hall Auditorium season, wrote Gideon Schein, had been “a series of plays that reflect the tensions and fears that have dominated this campus all year long.”  But “the entire cast and staff of Pajama Game touched that part of us all which needs reawakening --- our sense of fun and enjoyment.”  Click the picture for the cast and staff of that “breath of relief.”
(from Walt Galloway) 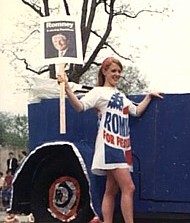 Every four years, Oberlin used to pretend to hold a big National Convention to choose a candidate for President.  The summer of 1968 was approaching and the Democrats were expected to renominate Lyndon Johnson with little opposition, so our Mock Convention would be more interesting if it were Republican.  As it turned out, Richard Nixon led on our first ballot, but after many maneuvers he finished in third place.
(from Tom Thomas)

Anne Brooks (Hormann) sent in this photo of the “Aloha” float, which won second prize in the big parade.  The sign promotes Hawaii’s favorite-son candidate, Sen. Hiram Fong.  Anne is one of the hula dancers, with Al Banner ’68 playing ukulele. 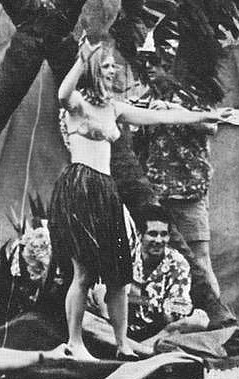 I found these informal photos of friends, taken outside an off-campus rental on Morgan Street in the fall of our senior year. 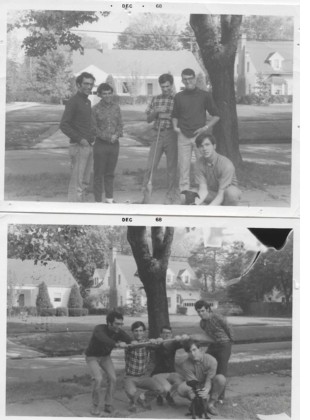 I was not an official tenant (ahem), but we had some wonderful times in that house.  Sweet memories. 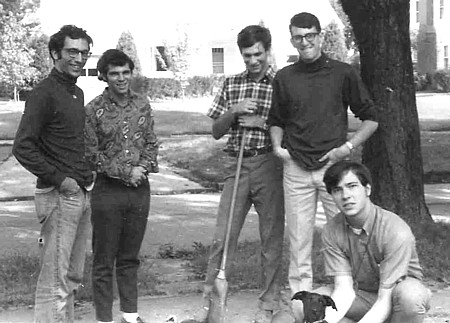 I don’t remember the name of the guy on the left (sorry) but the others are Bernie Arons (paisley shirt), Robert Krulwich (plaid shirt), Jeff Gordon (turtleneck), and Tom Witheridge cuddling the puppy (“Gudrun”).  After graduation, my family took Gudrun home and she lived to a ripe old age in Pittsburgh. 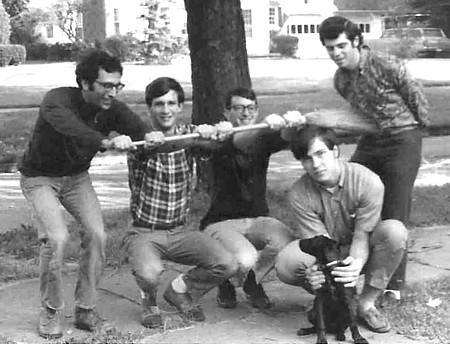 I have no idea what the broomstick was all about but it must have been relevant at the time. 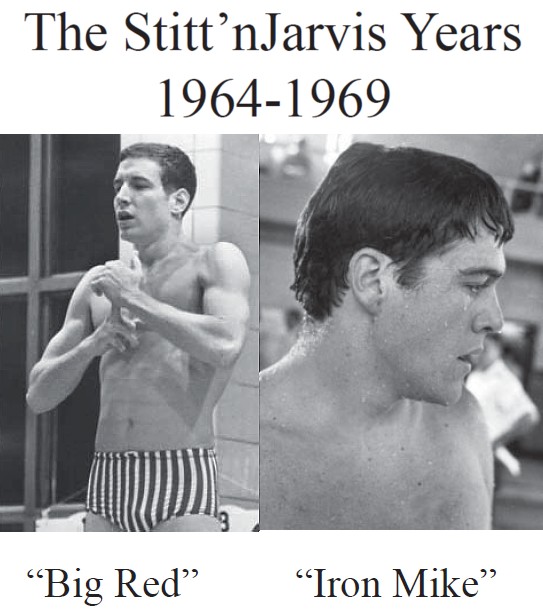 Click the image for a 59-page scrapbook celebrating the exploits of our swim team, including Steve Stitt & Mike Jarvis.
(from Walt Galloway) 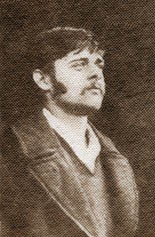 Our classmate Bill Hedges was one of the leaders of a February 1969 anti-war demonstration during which students paid a visit to the Cox Administration Building, chanting what they felt was being expected of them: "Work! Study! Get ahead! Kill!"  President Robert Carr misunderstood their intent, and WOBC's microphone was there to record Carr Confronted at Cox.
(from Tom Thomas)